After falling from a car park roof, cartoonist Tom Hannah is left with partial amnesia and the feeling that something important is missing from his life. His journey to recovery is hampered by a growing inability to distinguish between real and imaginary events. The characters from his cartoon strip assume a grimy reality, while the lives of his family and friends appear ever more unreal. The Wrong Story is about the borderlands between memory, imagination and the real world. It is about the desire for self-determination and the obligations on a responsible creator. But mostly it’s about a man who falls off a roof and wants to know why – was it an accident, did he jump, or was he pushed?

After falling off a roof Tom, a cartoonist, starts to see his characters around him and as a result, we learn so much more than expected about the lines blurring reality and fiction. He is exceptionally keen to find out just what happened the day that he fell and we are brought along on his journey along with trying, as a reader, to fill in the blanks.

Each character had a marvellous way of causing me to have emotions towards them. I am not ashamed to say that I detest Lawerence and I want to get to know the always-angry café owner to find out just why she is seen in this manner.

I found it an exceptionally engaging read, even went as far as to leave it on the car dash so people could see it as they walked past. The cover is very eye-catching and I am sure that some people may just look into it as a result of having seen it.

The Wrong Story is well written, positively hilarious and exceptionally surreal. A must-read for anyone who loves a quirky tale.

James lives near Bath and writes fiction. His first novel, The Wrong Story, was featured on Hookline’s Discover New Writers page and was published in March, 2017, by Unbound Books. He is currently editing his second novel. He has had a number of flash fiction and short stories published as well as a travelogue of his journey through Central America. James is a member of the Society of Authors and the International Flann O’Brien Society. 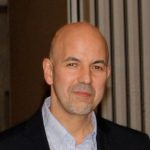