So glad to be back on another of Emma’s blog tours and this one has been a laugh a minute! Today I am bringing you a review of Reality Rehab by Lisa Mary London. Christina Philippou and Karen Reekie are also hosting today too so why not click here & here to go see what they have in store!

Faded TV star Gloria Grayson has hit rock bottom. Sacked from her starring role in a top soap, divorced from hell-raising actor ‘Mad’ Tommy Mack, and obese from binge eating, her days as Britain’s sexiest blonde are well and truly over.

Gloria has gained 70 lbs when a paparazzi snaps unflattering photos, and a cruel tabloid article relaunches her career. Instantly, she and her fat, feisty dog Baby-Girl are booked for TV’s Reality Rehab. Gloria is locked up with an American psychotherapist, a rabble of D-list celebrities and umpteen cameras, then put on a starvation diet. But worse is to come, with the shock arrival of her alcoholic ex-husband.

Tears and tantrums ensue, as the divorced couple’s joint therapy sessions take over the show and ratings soar. The other celebrities are infuriated to be sidelined and Reality Rehab fast becomes The Tommy and Glo Show. But Gloria and Tommy are hiding explosive secrets from each other and 10 million viewers – Reality is stranger than fiction!

Reality Rehab is the debut novel of Lisa Mary London, a journalist and former reality TV producer. A cast of hilarious characters, cliffhangers galore and an authentic voice that could only come from a TV insider, Reality Rehab is this year’s must-read!

‘Could just be the funniest book of the decade’ – Rajee Narinesingh, US Reality TV Star

Ah, folks, this book is totally not something I would actively seek out however the synopsis made me think I should change my tune for a day or two and try something a ‘little’ different. I have been known to read this genre before but not too often. This is an easy, fun read. Gloria reminded me of Bet Lynch from Corrie (am I showing my age here or is she still on the show??). A.J. gave me the total Gok Wan vibe and with Dr Lucien, I imagined Dr Christian from those weight loss shows. I could give you my thoughts on who all the characters are like but then I’d be giving the game away!

An ingenious part of the book is that after there has been something happen, in the house, there is an online article regarding the event and then the public comments that follow. I have read a couple of books this year that involve social media but this was a totally different take on it. I loved reading the comments as they were so realistic, I remember reading a couple thinking, ‘Why bother comment if you are going to say that!’

As someone who doesn’t watch reality T.V., I found this really good fun and I laughed quite a bit reading it. The celebs that were placed together in the Rehab house were so different it was fantastic. This is a really great ‘feel good’ book, wonderfully written and well worth the read.

Thank you so much, Emma and Lisa, for my copy of Reality Rehab. 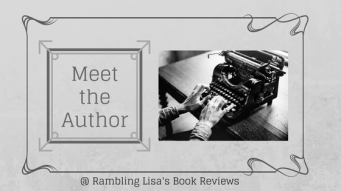 Lisa Mary London went from chief reporter on a sleepy Cotswold newspaper to become celebrity producer on some of Britain’s best-loved TV shows. Her TV credits include An Audience with Ken Dodd, A BAFTA Tribute to Julie Walters, The British Comedy Awards and I’m a Celebrity… Get Me Out of Here! She’s worked with stars from Kirk Douglas to Ant and Dec, and her debut novel Reality Rehab features around 200 famous names. ‘There’s never a dull moment when you’re working with the stars,’ says Lisa. ‘One minute you’re sipping champagne with Pierce Brosnan, the next you’re standing in the Ladies’ minding Barbara Windsor’s handbag.’ Reality Rehab is based on her real life, behind-the-screen experiences as a celebrity producer. ‘I’ve met many old school stars like my book’s protagonist Gloria, who curse reality TV and think the cast of TOWIE should be stacking shelves at Tesco, not walking the red carpet. ‘She’s a cross between Diana Dors, Boadicea 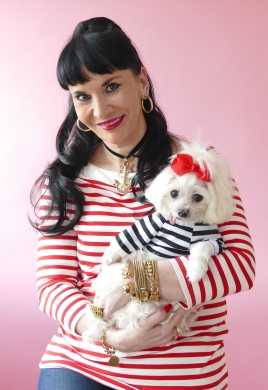 and Miss Piggy, a glorious, garrulous anti-heroine with bags of fattitude – Gloria puts the real in reality TV!’ Gloria’s petulant pooch Baby-Girl is closely based on the book’s cover star, Lisa’s beloved Maltese, Dolly-Dog (says Lisa – ‘You couldn’t make her up’). Dolly-Dog won fame on ITV’s Loose Women when she married Sherrie Hewson’s Westie Charlie, in a ceremony officiated by John Barrowman (available on YouTube). The couple split acrimoniously and are currently fighting for custody of a chew toy. A journalist by profession, Lisa has written for the Daily Mail and was briefly a News of the World reporter, but made her excuses and left before anyone was arrested for phone hacking. 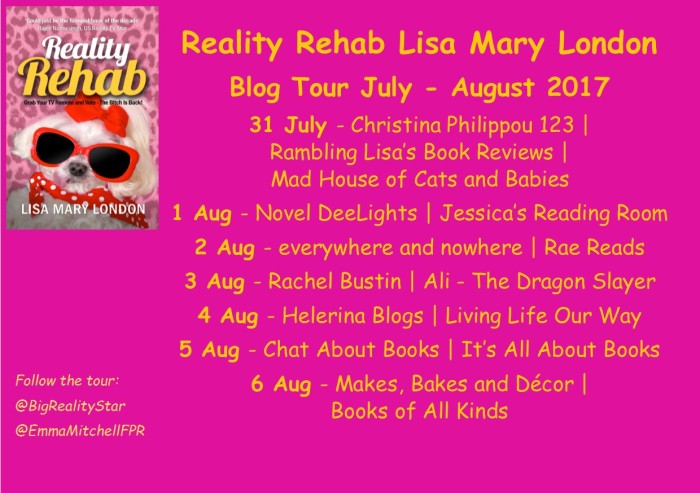